We read memoirs either because we wish to know about a life which is vastly different from our own, or because we recognize something similar to our own life experience.  For seven years, I avoided reading The Tender Bar because Moehringer’s memoir hit too close to home--literally.  He and I both grew up in the 1970s and 1980’s in a town called Manhasset, Long Island (“East Egg” in Fitzgerald’s The Great Gatsby). Moehringer’s mother Dorothy, having left J.R.’s violent, alcoholic father, is forced to move them into her parents’ home.  Grandpa and Grandma reside in a ramshackle Cape Cod. Dorothy’s brother Charlie, her sister Ruth and her six kids, also live in “Shit House”—five adults and seven children under one (leaky) roof.
Like Moehringer, alcoholism (my father’s) was a core issue of my childhood.  In his prologue, Moehringer writes,
“Anyone familiar with Manhasset understood why liquor surged through Fitzgerald’s novel like the Mississippi across a floodplain…Manhasset, site of the largest liquor store in New York State, was the only town on Long Island with a cocktail named after it (a Manhasset is a Manhattan, with more alcohol).  The town’s half-mile-long main drag, Plandome Road, was every drinker’s street of dreams—bar after bar.”

The “bar” in the title refers to Publican’s (initially named Dickens), a bar with which anyone who lived in and/or grew up in Manhasset at that time was well-acquainted.  Owned by Steve Schnitzer, J.R.’s Uncle Charlie (“Chas”) was the first bartender Steve ever hired to work there.  Grandpa’s house, conveniently, is exactly 142 steps from Publican’s.
As children, Moehringer and I also shared what psychologist Abraham Maslow defined as “The Need to Belong,” i.e. people are social beings who have a fundamental need to belong to a group, and, if this need is not met, people will have low self-esteem.  No kidding, Maslow; we all want acceptance and love!  Yet, when people are not available to us, books always are.

The Tender Bar is Moehringer’s exploration of how he found his people and his place to belong, his substitute father figures, and a world where words and stories were told or created.  As a boy who loved his mother, an incredibly courageous and tenacious woman, Moehringer also had an enormous desire to please her.  He worried about whether he would become a “success,” be the kind of man who can really take care of his mother.  He is very young when he declares that he will grow up to become a lawyer, and that he will attend Yale University.  When his mother moves him to Arizona as a young teen, J.R. loses his bedrock.  Dorothy understands this, and makes sure that he gets to spend the summer, and every summer thereafter, in Manhasset.  This means he spends summers in the company of his Uncle Charlie and Charlie’s co-workers and pals Colt, Bobo, and Joey D.  Let’s just say that hijinks ensue.

While in exile during the school year in Arizona, J.R. (then 13) gets a job at a mall book store, and comes under the tutelage of two employees.  Bill and Bud are very odd, but very dear men,  middle-aged bachelors who spend every waking moment reading the store’s contents in the stockroom.  J.R. has learned a lot about being a man in a man’s world in Manhasset, but it is here, with Bill and Bud, that he learns about the world by reading the curriculum they lay out for him.  J.R. gets accepted into Yale, where he feels he doesn’t belong.  He falls in love with a beautiful, high society woman student, and the class differences between them (and her own need to belong to her type of clique) end up breaking his heart.  J.R. takes many a late night train from New Haven to get down to Manhasset, to get to the bar, and to drink.  He is like a drone returning to the hive.  After graduation in 1986, Moehringer manages to secure a place as a copyboy at The New York Times, in a training program where someone with the right stuff could work his way up to becoming a full-fledged reporter.  Moehringer uses the last part of his memoir to determine whether he, as a man, can put away childish things and figure out where he truly belongs.

Moehringer’s comic but never condescending pitch-perfect portraits of his family, his friends, the staff and the regulars at Publican’s left me laughing out loud, and, occasionally, wiping away a few tears.  He breathes life into a very specific period and place, and there is not one false note.  The consummate prose, adept pacing and emotional content of the memoir are absolutely breathtaking.  Although The Tender Bar clearly is a work of nonfiction, Moehringer possesses the imagination and inventiveness of a great novelist.  How fortunate for us, since his first novel Sutton (based on the life of Willie Sutton, the bank robber) will be published by Hyperion on September 25, 2012.
Posted by The Wiseacre at 4:50 PM 1 comment: 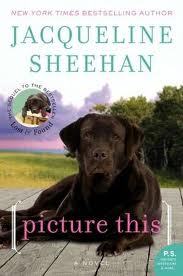 Once you have had the pleasure of reading a Jacqueline Sheehan novel, you will be hooked.  Her writing style is mellifluous and her characters are unforgettable.  Sheehan manages to create stories which are both appealing and authentic.  She conveys the joys of life, love, and nature—and captures this triumvirate in her lead female characters' relationships with their dogs—but she also mines the wells of human suffering and loss.  Her second novel LOST & FOUND introduces us to Rocky Pelligrino, who, at age 39, becomes a widow after her husband Bob’s sudden death.  Rocky leaves her home in Massachusetts and takes a leave of absence from her job as a college campus psychologist in order to escape her all-encompassing grief.  She flees to Peak Island Maine, and takes the job of Animal Control Warden.  Gradually, she discovers that you may run away from your life, but you cannot escape Life.  She saves a black Lab named Cooper after discovering him with an arrow embedded in his shoulder.  But, as anyone who loves dogs knows, Cooper really saves Rocky.  Sheehan also creates a cast of supporting characters who are every bit as compelling, fascinating and flawed as Rocky.  PICTURE THIS is the sequel to LOST & FOUND, and it is great to be reunited with Rocky and her friends—especially Cooper!

Rocky arrived on Peak Island in October.  Now it is summer, and she must decide whether she is going to return to her job in the Berkshires.  Rocky feels conflicted, since she has come to consider Peak Island as home, and has built strong relationships with friends Tess, Isaiah, and teenaged Melissa.  Then there is the possibility of new love with Hill, her archery instructor who lives on the mainland.  Before Rocky has a chance to sort through her feelings, she receives an astonishing phone call from a young woman named Natalie.  Natalie, age 18, has just been emancipated from the foster care system and claims to be Bob’s biological daughter.  Rocky is stunned by this call, and, as she is wont to do, impulsively invites Natalie to come to the island while they sort out the truth of her parentage.  Rocky tends to lead with her heart even though she is a sensible and intelligent woman.  It’s only been a year since Bob’s death, and this news causes her to lose some of the ground she has gained.  Rocky behaves impulsively, and her actions may cost her and her friends very dearly.

I do not want to give away any of the plot and spoil an iota of Sheehan’s magnificent ability as a story teller.  The chapters are written from alternate characters’ points of view—including Cooper’s—and the prose is rich and rewarding.  Sheehan utilizes her background in psychology and captures people being very real.  Her characters deal with the damages life can inflict in ways which are, by turns, horrifying or astonishingly heroic.  Her story line is riveting, and I very much hope that there is a third Rocky Pelligrino novel in the works.  Even if you did not take a vacation this summer, when you read PICTURE THIS you will have traveled well.