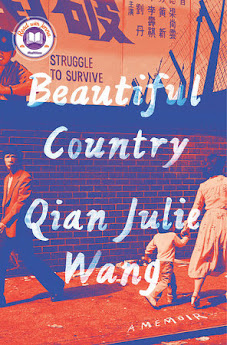 Beautiful Country already has been hailed as a “new classic” memoir. The author, Qian Julie Wang, said that she drew a lot of inspiration from Maya Angelou’s I Know Why the Caged Bird Sings (Wang uses a quote by Angelou as her epigraph) and Frank McCourt’s Angela’s Ashes. I would add that Beautiful Country harkens to  Maxine Hong Kingston’s The Woman Warrior with its “autobiographical accuracy, cultural authenticity, and ethnic representation.” *Yuan Shu, Director of Asian Studies, Texas Tech University. Both Kingston’s and Wang’s are memoirs of a Chinese girlhood. All four are memoirs of childhood trauma.

On July 29, 1994, Qian Qian (as she was known as a girl) was seven years, five days old when she and her mother (Ma Ma) arrived from China to join her father (Ba Ba) in Brooklyn, New York. Ba Ba  had left on a visitor’s visa two years earlier for the United States or “Mei Gou, a name that translated literally into ‘Beautiful Country…’”

Qian Julie Wang was born and raised in Shijiazhuang, China. Both her parents were successful, and Qian Qian, an only child, had a relatively happy early childhood. Her father was an English professor, and her mother was a math professor who had published two textbooks on computer science in 1993 at the age of thirty-one. Yet China has a long memory, and because her father’s elder teenage brother had signed his name to an essay criticizing Mao Zedong in 1966, the Wang’s never managed to regain their family name’s honor or status.

For the next five years Qian Julie and her parents lived with abject poverty, in actual rat trap, roach-infested housing. They were not “food challenged,” they were hungry every day. Depending on the season, their home was either too hot or too cold. They had few clothes, and they furnished their home with items they scavenged from garbage on the street. They did not have money for medical care and dental visits.

Ba Ba initially worked as an unskilled laborer. Ma Ma’s first job was at a sweatshop, sewing labels on the seam of shirts for twelve-hour shifts for three cents a piece. Qian Qian worked alongside her mother that summer, holding scissors which were much too large and heavy for her child’s hand “to cut all the loose strings dangling off the seams.”

Her parents inoculated Qian Qian with the profound importance of keeping their truth a secret. No one could know they were undocumented. People of other races, especially white people, were not to be trusted. “Just remember this, Qian Qian: we are safe only with our own kind.” People in authority, especially police officers, were the people to be most distrusted. Qian Qian began second grade that September without knowing English, and with the constant presence of fear, shame, humiliation, and worry. Her parents were so caught up in their own trauma that they did not and could not protect Qian Qian in ways a parent should. Although they loved their daughter, they traumatized her too. She felt responsible for their safety and happiness.

When a person experiences trauma, particularly multiple and/or extended, ongoing trauma,and specifically childhood trauma, they have trauma responses, “fight, flight or freeze.” “Fight” means becoming aggressive (or fighting back). “Flight” means fleeing the situation. And “freeze” means the person is unable to do anything at all. There is a fourth response which childhood trauma creates: the fawn response. In order to avoid more trauma, children learn to please their abuser. “In other words, they preemptively attempt to appease the abuser by agreeing, answering what they know the parent wants to hear, or by ignoring their personal feelings and desires and by doing anything and everything to prevent the abuse. Over time, this fawn response becomes a pattern.” Elizabeth Mahaney, LMHC, MFT, Ph.D

Qian Julie Wang employed all four trauma responses to survive her childhood. She also used her incredible intellect, her strong will, her passion for books and language, her love and loyalty to her parents, her imagination, her sense of humor and her ambition as the tools to rise above her childhood circumstances. As an adult, Qian has achieved the “American dream.” I think she wrote this book and revealed her “secrets” so that we could see the cost of all that pain and suffering. One of the gifts which trauma robs from people is a voice. Qian Julia Wang has an extremely powerful voice. Such is her gift for storytelling and her ability to share her childhood mind with intricate detail, that Qian allows the reader to accompany her through her childhood. I read this book twice in two days: the first time to find out what happens to Qian Julie, and the second just to read her exquisite prose.

I give Beautiful Country my highest recommendation.

Thank you to NetGalley and Doubleday for allowing me to read an advance ebook reader’s copy.

“I document these stories for myself and my family, and not the least my uncle, our innominate hero. I write this also for Americans and immigrants everywhere. The heartbreak of one immigrant is never that far from that of another. Most of all, though, I put these stories down for this country’s forgotten children, past and present, who grow up cloaked in fear, desolation, and the belief that their very existence is wrong, their very being illegal. I have been unfathomably lucky. But I dream of a day when being recognized as human requires no luck--when it is a right, not a privilege. And I dream of a day when each and every one of us will have no reason to fear stepping out of the shadows.” --Qian Julie Wang, Beautiful Country