Wrapped in Her Love, Then, Now and Always 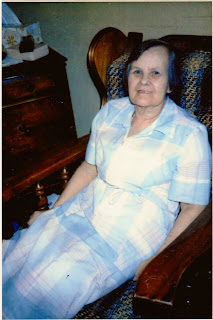 On October 25, 2001 my beautiful Grandma, Kathleen, died at age ninety-five. She was love, kindness and generosity personified.  We each were so blessed to have her in our lives and as our matriarch.
My grandmother came to the United States in October 1930 with her younger sister Nellie.  She was twenty-four and had been in domestic service for ten years. She and Nellie had been working in a great house in England, Grandma as a cook, and Nellie as a housemaid.  Their eldest sister Mary invited them to come to New York.  My grandmother was a vegetable cook at a Schrafft's restaurant in Manhattan. She lived in Sunnyside, Queens with her sister.  They both met their future husbands at the same a parish tea dance in 1931, and both were married before the end of that year. Grandma and my Grandpa, George, were married for nearly fifty years before his death in February 1981. They raised four children, and had eight grandchildren, and three great-grandchildren.

I grew up in a house that was just a few blocks from my grandparents' home in Bayside, Queens. When I was a toddler, Grandma would jostle me on her knees and repeat nursery rhymes.  She gave me such a gift by imprinting me with the combination of love and the music of words. She doted on me, but she did not spoil me. Can you really spoil a child with a tremendous amount of love?  She had the wisdom of allowing me to "help" her in the kitchen. "My" kitchen drawer was filled with a small wooden spoon, jelly jar tops, white cardboard separators from Lipton tea boxes, crayons, and string. There was a stool in the corner of the kitchen so that I could sit and watch her prepare and cook meals yet remain out of harm's way. I felt useful and content.
Grandma taught me about resilience, determination and strength. She was diagnosed with multiple sclerosis in the late 1940's. Her mobility became quite limited within a few years. My Grandma was a remarkable homemaker. She raised four children through the Great Depression and World War II. She was homebound when my mother was still a girl in the early 1950's. Necessity was the mother of invention in terms of how Grandma cleaned and cooked. Housework was a lot of physical labor then. There were no amenities like a dishwasher. The family clothing had to be starched and ironed. I remember how she would bring the laundry up from the basement and hang it on the pulley-operated clothes line which hung from the back of the house to the back of the garden.  I loved to hand the wooden clothespins up to her. She had so much upper body strength. She was raised in rural Ireland and was very much a country woman. With her disability, the closest she got to nature was standing on the back stoop of her home. As my own body has broadened, I take pride and comfort in seeing how similar my appearance is to hers when she was in her fifties. My mobility is limited too, but I have a clean home.  I love doing the laundry. Tasks have to be performed, and I'm a good problem-solver like my Grandma.
When she was eighty-two, Grandma could no longer live on her own without assistance. She spent the last thirteen years of her life in a Catholic nursing home. She amazed me by finding the positive aspects.  Grandma made sure she was in her wheelchair and the first one downstairs when the dining room opened for meals. She made friends with the servers, and that ensured that every day she had one of her life's greatest pleasures: a piping hot cup of coffee. Grandma was a devout Catholic woman.  She prayed the Rosary and had a special devotion to The Blessed Mother.  Mass was held daily at the nursing home, and Grandma attended.

My Grandma didn't dwell on what she couldn't do, but on what she could.  "At least I have the use of my hands," she remarked after one of the other women on the hall had a stroke. She used those hands to hold ours tightly.  "I have my eyesight," she said, despite being legally blind. When she looked at me, or anyone she loved, she really saw you, down to your soul. "I can still hear," she asserted. My mother and I would visit her on a Sunday afternoon, and Grandma would have golf on the television.  Mommy and I were stunned when a player made a fantastic shot, and the gallery began applauding. The applause of the spectators came out of the television at such a loud volume that we thought we might lose our hearing. Then we three generations of women burst out laughing.
When Grandma died fifteen years ago, I grieved. I also pushed on because when life presents challenges, that's what you do. I miss her every day, and she still is teaching me about life and how to live. I recall that the priest who celebrated her funeral Mass said that she was now "in a place where there is no pain, and where there is no judgment."  For me, that place existed here on earth wrapped in her love.