Too Great A Burden To Bear

My heart has been broken again and again in the past year by national and global events. I write this in an effort to understand events which are incomprehensible.

Tonight people gathered to watch fireworks in Nice, France to celebrate their national holiday, July 14th, and to mark the occasion when the French people took the power out of the hands of the tyrannical and created a free republic.  The New York Times article reads Scores Reported Dead in Nice, France, as Truck Plows Into Bastille Crowd. At least eighty people have died, and many more are injured.

On June 12, 2016 at the gay nightclub Pulse in Orlando, Florida forty-nine people were murdered and fifty-three people in the deadliest mass shooting in United States history and the worst terrorist attack since 9/11. Orlando Gunman Attacks Gay Nightclub, Leaving 50 Dead (The New York Times)

This month our country's legacy of racial inequality has yielded the murders of innocent black people by police officers -- Alton Sterling in Baton Rouge, Louisiana on July 5th, Philandro Castile in Falcon Heights, Minnesota on July 6th.  One week ago, Thursday, July 7th, there was a peaceful demonstration in Dallas, Texas at which people protested these latest deaths of black people at the hands of police officers. Micah Johnson a black man who had been discharged from the U.S. Army in 2015 after serving in Afghanistan, armed himself and went to this demonstration   He wanted to kill white police officers in retaliation for police brutality against black people.  Five Dallas Officers Were Killed as Payback, Police Chief Says (The New York Times)

When President Obama addressed the nation on Friday, July 8th, he said,

"Last year, we put together a task force that was comprised of civil rights activists and community leaders; but also law enforcement officials. Police captains, sheriffs," he said. "And they sat around the table, and they looked at the data and looked at best practices."

"There's some jurisdictions out there that have adopted these recommendations," he continued. "But there are a whole bunch that have not."

One of the jurisdictions hailed by Obama's task force was the Dallas Police Department - the same agency that the president would mourn 24 hours later after five officers were killed in a stunning attack in the city's downtown. That attack came at the tail end of a peaceful march organized to draw attention to the police use of force.

The irony at the heart of the Dallas police deaths after a Black Lives Matter march, (The Washington Post)

I have Post-traumatic Stress Disorder (and this is not the time to explain what caused it).  In order to survive both the traumas and the effects of my illness, I have had to withdraw from the world at times.  There is a time for righteousness and to demand justice.  I applaud people who are out there on the front lines at this moment, who are doing something, and/or saying something because all of this murder, violence and terrorism has to stop.  However, I am unable to do anything right now because all of this news has paralyzed me. I have gone to ground.

Three years ago I watched Bill Moyers television program "Moyers & Company" on the night he was interviewing Sandra Steingraber.  (The episode is titled The Toxic Assault on Our Children,)  She was discussing the environmental crisis and climate change. She also said,

"Well-informed futility is an idea that psychologists hit upon in the 1960s, specifically to explain why the people watching television news about the Vietnam War came to feel more and more futile about it.  Whereas people who watched less television felt less futile. So it seemed like a paradox, right? The more informed you are, you think of knowledge as power.

But in fact, there is a way in which knowledge can be incapacitating. And so the psychologists went further and now have applied this to the environmental crisis and point out to us that whenever there's a problem that seems big and overwhelming, climate change would be one, and at the same time, it's not apparent that your own actions have any meaningful agency to solve that problem, you're filled with such a sense of despair or guilt or rage that it becomes unbearable.

If you need to take care of yourself because all of this hurts too much, then do so.  You do not have to prove your worth as a human being by watching the news or by engaging in social media.  Focus fully on your life at present. You may need to save yourself first before we all save the world together.

Posted by The Wiseacre at 11:59 PM No comments: 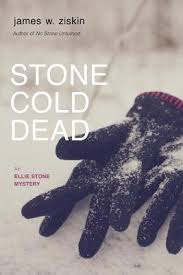 Note:  HEART OF STONE, the fourth Ellie Stone Mystery, was published on June 7, 2016.
Posted by The Wiseacre at 5:11 PM No comments: