Reading Countdown to the Anthony Awards at Bouchercon 2016! #15in15 Week 4 #12 YOUNG AMERICANS

This is the fourth week of Reading Countdown to the Anthony Awards at Bouchercon 2016. Now there are twelve weeks until the 2016 Anthony Awards are presented at the Bouchercon XVLII World Mystery Convention in New Orleans on Friday, September 16, 2016.

This week I suggest you read the fourth nominee alphabetically in the Best Paperback Original category, Josh Stallings's YOUNG AMERICANS. 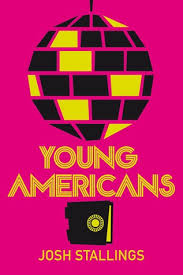 Josh Stallings's novel was published on October 30, 2015.  He calls YOUNG AMERICANS a "Glam Rock Disco Heist Novel."  (In case you don't get the cultural reference of the title, David Bowie released an album of the same name in 1975, and  "Young Americans" was a single of the same name.) Set in San Francisco on New Year's Eve 1976, this is a rollicking crime fiction novel which is so accurate and authentic to the time, place and characters that the reader will come away with the soundtrack firmly implanted in their head and with some glitter on their face. This all about sex, drugs, cash, guns,fast cars, and being young and wild in the 1970's. Stallings was nominated for an Anthony in 2014 for his memoir All The Wild Children: A noir memoir.

You can order a copy of YOUNG AMERICANS here with these links for IndieBound, Amazon, Barnes and Noble,or purchase it at your local independent bookstore.
Posted by The Wiseacre at 6:09 PM No comments:

Reading Countdown to the Anthony Awards at Bouchercon 2016! #15in15 Week 3 #13 LITTLE PRETTY THINGS

This is the third week of Reading Countdown to the Anthony Awards at Bouchercon 2016. Now there are thirteen weeks until the 2016 Anthony Awards are presented at the Bouchercon XVLII World Mystery Convention in New Orleans on Friday, September 16, 2016. 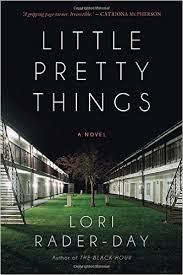 Lori Rader-Day's crime thriller/murder mystery LITTLE PRETTY THINGS was published by Seventh Street Books on July 15, 2015. It is an incredible psychological thriller and suspense tale with a small town setting, and the plot revolves around a ten-year high school reunion.  The past does not remain in the past.  Rader-Day is a marvelous writer who alternately gives the reader chills and genuine laughs. The novel won the Mary Higgins Clark Award in April 2015 when the Mystery Writers of America presented the Edgar Awards.  Rader-Day's debut novel The Black Hour won Best First Novel at the 2015 Anthony Awards (Bouchercon 2015), 2015 Lovey Award (Love Is Murder Conference), and 2015 Silver Falchion Award (Killer Nashville).

You can order a copy of LITTLE PRETTY THINGS here with these links for IndieBound, Amazon, Barnes & Noble, or purchase it at your local independent bookstore.

Posted by The Wiseacre at 5:51 PM No comments: 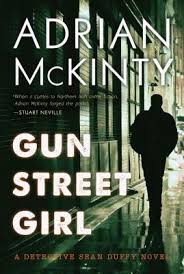 The Detective Sean Duffy novels are set in Belfast in the 1980's during "The Troubles." Sean McDuffy is a Catholic police detective in a predominantly Protestant area. McKinty's Duffy novels are renowned for being both dark and witty.  McKinty has a gift for using the police procedural to examine the larger historical and societal issues at play.  GUN STREET GIRL is the fourth in the series.  The fifth RAIN DOGS  is on the longlist for the 2016 Theakstons Old Peculier Crime Novel Of The Year and on the longlist for the CWA Ian Fleming Steel Dagger Award 2016.

You can order a copy of GUN STREET GIRL here with these links for IndieBound, Amazon, Barnes & Noble or purchase it at your local independent bookstore.
Posted by The Wiseacre at 4:20 PM No comments: 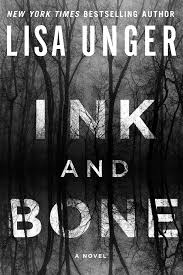 Ink and Bone is a special blend of psychological thriller, supernatural horror, and domestic drama. Finley Montgomery, age 21, has left her hometown of Seattle and settled with her beloved grandmother Eloise in The Hollows, a small town in upstate New York. Finley is attending a local college and studying abnormal psychology, particularly Carl Jung. Her life has been atypical.  She has been seeing spirits and having visions since she was a small child.  Finley came east  so that Eloise, who is a renowned psychic, and Eloise's own mentor Agatha can aid and instruct Finley about how to master, hone and live with her abilities. Eloise works with local private investigator Jones Cooper on missing persons cases. Eloise knows that her granddaughter has extraordinary gifts, and, from her own experience, knows that such gifts often come with a price. The Hollows, the setting for earlier novels by Unger, is like many small communities, and yet it is a uniquely strange place.

"The negative energy of The Hollows could not be denied.  It was no secret to Finley, who felt it constantly. The Hollows boasted an anomalous number of missing persons, of miscarriages, of accidents and unexplained events. Throughout its history, there had been brutal murders, witch burnings, and horrible mining accidents. There's a powerful energy here, Eloise had said more than once.  It's not always positive, it's not always negative, but it always demands something from people like us."

Jones brings a case to Eloise.  Merri Gleason wants them to look into the disappearance of her eight-year-old daughter which happened ten months ago. Merri and her husband, a successful couple from Manhattan, had rented a lakeside cabin near The Hollows the previous summer. While Merri napped, Wolf took their thirteen-year-old son and their daughter on a nature hike.  Two men appeared, shot Wolf in the leg, then shot his son, and abducted the little girl. The Gleason family have been in torment since then, and Merri believes Eloise is her last chance to locate her daughter.

Finley has been having auditory hallucinations which Eloise believes is related to the girl's disappearance. Eloise tells Jones and Finley that this case requires Finley's gifts. As soon as Finley and Jones visit the trail where the girl was abducted, Finley has a vision from the perspective of a person who was there when the abduction occurred.  These visions continue and, combined with Jones's own detective work and some other leads, bring Finley and Jones closer to the truth about where the girl was taken and why.  This truth, and The Hollows, may require a sacrifice from Finley.

Lisa Unger is an exceptional psychological thriller writer. Her writing is engaging and cinematic, the plotting is seamless, and the characters are vivid and realistic. Each character's psyche, motivation, and actions are thoroughly examined and explained, the mark of a true psychological thriller. She uses supernatural elements--psychic abilities, ghosts, the setting of The Hollows--to disclose the all-too-real horror of a child abduction.  By doing so, Unger is able to raise an essential question: What is a "normal" life? To Finley, seeing spirits and having visions is part of daily existence.  Merri has spent nearly a year not knowing whether or not her daughter is dead or alive, and while that is unimaginable, it has become her reality.  A little girl is using her wiles to stay alive while being held captive by evil people who masquerade as small town folks. Furthermore, Unger shows a true understanding of how trauma affects people.  Some people are devastated by traumatic events, while others have resilience and not only recover but discover they have gained skills and a capacity for survival they would not otherwise possess.

Ink and Bone is a riveting and thought-provoking thriller which is sure to be a popular and ideal "summer read," providing readers with chills and excitement. I look forward to spending more time in The Hollows and getting to know its residents better in Lisa Unger's next outing.

Thank you, Touchstone Books, for providing me with an advance reading copy through NetGalley.

Reading Countdown to the Anthony Awards at Bouchercon 2016! #15in15 Week 1 #15 THE LONG AND FARAWAY GONE

As of tonight, Friday, June 3, 2016, there are fifteen (15) weeks until the 2016 Anthony Awards are presented at the Bouchercon XLVII World Mystery Convention in New Orleans on Friday, September 16, 2016.

What are the Anthony Awards?  Here's what Wikipedia says:

The Anthony Awards are literary awards for mystery writers presented at the Bouchercon World Mystery Convention since 1986. The awards are named for Anthony Boucher (1911–1968), one of the founders of the Mystery Writers of America.[1] Among the most prestigious awards in the world of mystery writers, the Anthony Awards have helped boost the careers of many recipients.

Coincidentally, there are fifteen (15) novels by 2016 Anthony Awards Nominees in three of the categories:  Best Novel, Best First Novel,  and Best Paperback Original.  All categories are equally important, but for our purposes, why don't we try reading one of these crime novels each week?

This week I suggest you start with the first nominee alphabetically in the Best Paperback Original category, Lou Berney's THE LONG AGO AND FARAWAY GONE. 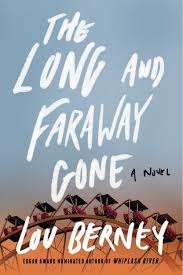 Author Lou Berney has already received the several major awards for this regional crime mystery, including the 2016 Edgar Award for Best Paperback Original2.  William Morrow Paperbacks published it in February 2015.  You can order a copy of THE LONG AGO AND FARAWAY GONE here with these links for William Morrow Paperbacks, IndieBound, Amazon, Barnes & Noble, or purchase it at your local independent bookstore.
Posted by The Wiseacre at 9:18 PM No comments: