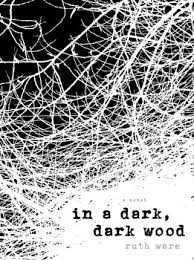 Last year, I had the distinct pleasure of reviewing a debut psychological thriller by Ruth Ware, a British author, which was being published by Scout Press Books.  Since then, the film rights were bought by Reese Witherspoon and the film adaptation is being adapted for the big screen.

The paperback edition was published on April 19, 2016 and now this:

Paperback Trade Edition of In A Dark, Dark Wood by Ruth Ware debuts on The New York Times Best Seller List at Number 10!!!!

I urge you to pre-order Ruth's second novel The Woman In Cabin 10, which shall be published by Gallery/Scout Press on July 19, 2016.

While every psychological thriller since 2012 has had to bear the burden of comparison to Gillian Flynn's GONE GIRL, Ruth Ware's novel harkens back to Agatha Christie's masterful "whodunit," AND THEN THERE WERE NONE. Ware employs Christie's ingenious plot device, i.e. friends are invited to a remote location on a pretext when the real intent is nefarious (and Ware's characters reference Christie's novel), Ruth Ware's thriller IN A DARK, DARK WOOD is brilliant, riveting and original.

Leonora Shaw, who prefers to be called "Nora," age twenty-six, lives a rather solitary life, and writes crime books in her tiny studio flat in Hackney (a borough in Greater London).  Nora tells the story, as the first-person narrator. Since she works from home, she sticks to a routine, and she starts each day with coffee and toast, and then out for a long run.  After a shower, she checks her emails.

Nora is startled and upset when she receives a group email invitation to a "hen party" (the English version of a bachelorette party).  The sender is Florence Clay, who is hosting the weekend in honor of Clare Cavendish. When Nora was growing up in Reading, Clare had been her best friend.  Clare was the Queen Bee, beautiful, popular, alternately warm and loving, and cruel and hateful. Nora has not seen Clare in ten years, not since she left Reading at age sixteen. The circumstances surrounding Nora's leaving home are kept secretive. It is clear that this was a turning point in Nora's life.  She had gone by "Lee" then, and now is firmly "Nora."

The only other guest in the group email whom Nora recognizes is Nina de Souza, a friend from childhood who is still part of Nora's life in London. Nina is a doctor training as a surgeon who has recently returned from a stint with Medcins Sans Frontieres (Doctors Without Borders) in Colombia, repairing gunshot wounds.  Nina is a very witty, intelligent character, and provides a great deal of relief throughout this suspenseful story. Nora makes a pact with Nina to attend the party.  The hostess, Florence Clay, known as "Flo," is Clare's "BFF" from university.  She is highly strung and absolutely idolizes Clare, even dresses like her.  The party is being held in Flo's aunt's country home, The Glass House, a magnificent structure which seems incongruous with its setting in the woods of Northumberland.  Melanie Cho, a lawyer who is married and a new mother of a six-month-old boy, is another friend from Clare's days at university.  The fifth guest is Tom Deuxma, a very handsome gay man and a playwright.  (His husband Bruce is a theater director.)  Finally, Clare Cavendish arrives.  Then, to paraphrase Northumberland in Shakespeare's Henry V, the game is afoot.

Ware's writing style is perfectly suited to suspense.  Each character is drawn flawlessly. Her prose is efficient, and moves the plot along, but can be rather lyrical and descriptive, particularly with Nora's interior monologues. The pacing is superlative. Ware utilizes flashbacks, or, rather, reverse chronology, from the start and throughout the novel.  The reader knows right away that something bad has happened.  But what?  How did it come to pass?  And who did it?  Nora may seem like an underdog, but is she a dark horse?

I enjoyed IN A DARK, DARK WOOD completely and thoroughly.  This psychological thriller contains all the right elements and stands on its own merits.   Ruth Ware is a significantly talented writer, and has an exceptional career ahead of her.

Thank you to Gallery/Scout Press for loaning me a digital copy to read through NetGalley.