Book Review: WHAT WAS MINE by Helen Klein Ross 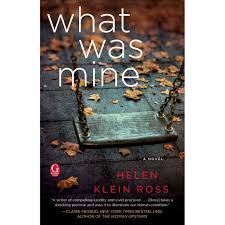 Book Review:  WHAT WAS MINE by Helen Klein Ross

American women who were born in the 1950's and early 1960's--the Baby Boomers--had an abundance of choices and opportunities when we were in our twenties in the 1980's. Many of us obtained college educations, and graduate degrees, more than any previous generation of women ever had.  We wanted, and expected, to have the same career opportunities that men had.  We weren't naive.  We knew we had to work smarter, harder, and longer hours than our male counterparts in order to be considered for promotions.  We also learned that we generally received less money than men did with those promotions.  So we continued to work smarter, harder and longer.  We knew how to succeed.  We met our spouses back in school or through work, and married. We deferred having children because we wanted to save up money to buy a house in the suburbs or a two-bedroom apartment in Brooklyn. There was one obstacle which we hadn't considered: our biological clock.  As I said to a woman friend who is a Millennial, "You don't get two '20's' and turn 40."  No matter how goal-oriented a woman may be, she cannot control biology. For many women, the postponement of children meant there would be no children.  Many couples used fertility and reproductive technology so that the woman could get pregnant.  Sometimes this worked. Sometimes it didn't. Women realized we couldn't have it all.  But what if you were a woman who would do anything to have a child?

Helen Ross Klein's psychological thriller WHAT WAS MINE poses that very question. Lucy Wakefield was born in 1954.  She attended the Ivy League university Cornell, and met Warren there, and they marry in 1979. They live in Manhattan, where Lucy works in advertising writing copy, and Warren is a consultant.  They get caught up in their careers. When Lucy and Warren turn thirty, his father dies.  The couple jump-start their plans to have a family.  They purchase a home in the New Jersey suburbs, and start fertility treatments.  Lucy decorates and stocks a nursery that is completely prepared for arrival of the baby she is sure they will have. The treatments don't work.  Warren won't adopt.  Warren meets a younger woman. Warren leaves Lucy when they are thirty-five in 1989.

"When Warren left me, I was thirty-five, the age grandmothers died in the Middle Ages."

Lucy pours her energy into her career.  Her advertising firm wants to land IKEA as an account. The second IKEA store in the country has opened in Elizabeth, New Jersey, not far from Lucy's home. She's goes there to do research in May 1990, then returns to IKEA every Friday that summer.  It's the perfect place for a woman to fantasize about everyday family life, and for her to watch children playing in the store's Ball Room. Three months later, on Friday, August 10, 1990, Lucy returns to IKEA. She's looking for candles but, instead, Lucy finds a baby girl on her own in the plastic infant carrier of a cart.  Lucy finds "her" baby.  She names the baby "Mia," a name which means "mine."

WHAT WAS MINE is an amazing and provocative thriller, and Helen Klein Ross is a brilliant writer. She has a true gift for making the reader examine moral complexities and feel a range of emotions, all while offering a highly entertaining read. She provides a very informed and modern tale based on the one of the most primal and ancient desires:  to be a mother. The action--and the chaos--occurs in the homes, offices and hearts of working women, and what is at stake is a child, and the direction of many people's lives. Helen Klein Ross's novel encompasses and explains women's issues from a generation ago, matters with which women still grapple.  The story unfolds from the point-of-view of multiple characters, major and minor. Her characters are quite real, believable and nuanced.  One has a certain amount of sympathy for the baby's birth mother Marilyn. But it is very hard not to root for Lucy.  She is a kidnapper, and she carries a great deal of guilt over what she has done. Lucy makes a lot of sacrifices to be a good mother, working hard to provide Mia with a good life, a first-rate education and other privileges.  Eventually, Lucy has to face the music. Being a mother involves great pain along with great joy.  There are some complicated but plausible plot twists and Ross pulls all of them off with panache and talent.  I look forward to Ross's next thriller!

{Thank you, Gallery Books, for providing me with a digital copy of this novel through NetGalley.}
Posted by The Wiseacre at 10:08 PM