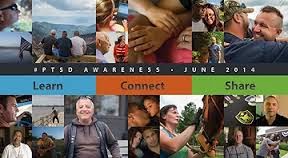 June is National PTSD (Post-traumatic Stress Disorder) Awareness Month.  The NIMH (National Institute of Mental Health) has this information on its website:

What is Post-traumatic Stress Disorder (PTSD)?
When in danger, it’s natural to feel afraid. This fear triggers many split-second changes in the body to prepare to defend against the danger or to avoid it. This “fight-or-flight” response is a healthy reaction meant to protect a person from harm. But in post-traumatic stress disorder (PTSD), this reaction is changed or damaged. People who have PTSD may feel stressed or frightened even when they’re no longer in danger.
PTSD develops after a terrifying ordeal that involved physical harm or the threat of physical harm. The person who develops PTSD may have been the one who was harmed, the harm may have happened to a loved one, or the person may have witnessed a harmful event that happened to loved ones or strangers.
PTSD was first brought to public attention in relation to war veterans, but it can result from a variety of traumatic incidents, such as mugging, rape, torture, being kidnapped or held captive, child abuse, car accidents, train wrecks, plane crashes, bombings, or natural disasters such as floods or earthquakes.

I have PTSD.   I was the victim of a violent crime in 1991 at age twenty-eight. When I sought treatment for depression in 1994,  the psychiatrist misdiagnosed and treated me for bipolar II disorder. I know that I will spend the rest of my life "in recovery" from the traumas which caused and which perpetuated my PTSD.  Yet, I consider myself to be extremely lucky in that I now have an excellent psychiatrist and outstanding therapist who give me continuous support, care and counseling. I have learned quite a lot about PTSD in order to deal with the attendant depression, anxiety, panic attacks, and nightmares I experience.  I have experienced both self-imposed isolation and abandonment by family and friends. While I must expend much of my time and energy fighting my own private battle with PTSD, I face the bitter paradox of being ill and having to combat ignorance and stigma.  I am resilient, and I am strong, but I, like any other person with PTSD, would benefit greatly if more people understood what PTSD is, and voiced their concern

This month I shall be examining PTSD in several posts.  Today I offer some horrifying statistics about what our returning U.S. veterans are facing.
2.4 million U.S. servicemembers have served in the Iraq War (Operation Iraqi Freedom) and in the War in Afghanistan (Operation Enduring Freedom).  As of  June 2, 2014, 6, 805 have been killed, and nearly 50,000 have been wounded.  Then there are those returning veterans who are suffering with PTSD.  The U.S. Department of Veterans Affairs National Center for PTSD gives the following statistic:
In about 11-20% of Veterans of the Iraq and Afghanistan wars (Operations Iraqi and Enduring Freedom), or in the range of 11-20 Veterans out of 100 who served in OEF/OIF

220,000 is a conservative estimate of how many veterans have PTSD.
The RAND Corporation (the nonprofit global policy think tank formed to offer research and analysis to the United States Armed Forces)  survey in 2008 yielded a much higher statistic:
18.5% of all returning servicemembers meet the criteria for PTSD or depression...14% of returning servicemembers meet the criteria for PTSD...14% of returning servicemembers meet the criteria for depression...
That means that now, in 2014, at least 460,000 veterans are dealing with PTSD, and further reports show that less than half of them seek help.  Even when veterans do seek help, the VA only has stopgap measures in place.  The aforementioned National Center for PTSD run by the U.S. Department of Veterans Affairs "conducts research and provides education on the prevention, understanding,  and treatment of PTSD" but it "does not provide direct clinical care."

When veterans with PTSD cannot get a proper diagnosis, nor treatment, counseling, and support, another alarming statistic appears.  The Department of Veterans Affairs  issued a "Suicide Data Report" in 2012.  The report examined suicide data of veterans from 1999 to 2010, and revealed that a veteran commits suicide once every sixty-five minutes.  That is 18 suicides a day.  But that number jumped to 22 suicides a day in 2012. Since approximately 31%  of veteran suicides were committed by those under the age of forty-nine, there have been at least 40,000 veteran suicides. Translation:  nearly six times as many veterans die from suicide than they do from combat.

What must be done?  According to Paul Rieckhoff, the Founder and Executive Director of IAVA (Iraq and Afghanistan Veterans of America), there has to be a huge increase of qualified military mental health professionals. The long-term cost of treating veterans may run as high as $3 trillion. There also must be an increase in the employment of veterans to offset the financial problems which compound stress.

Senator Bernie Sanders, I-Vermont, Chairman of the Senate Veterans Affairs Committee will be introducing a bill to tackle the extensive problems in the VA health care system to the Committee on Thursday, June 5, 2014.  His proposed bill is called The Restoring Veterans' Trust Act of 2014.

Finally, there must be a marked change in our society's attitude toward all people struggling with mental illness. Stigma keeps veterans from seeking what treatment there is.  It's hard enough to fight PTSD without facing discrimination, shame, harassment, and lack of understanding.