Blog Tour For A PEOPLE'S HISTORY OF THE PECULIAR by Nick Belardes - My Connection To Odd History, Large and Personal 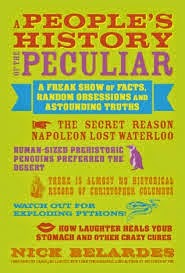 Today, I am honored to be part of Nick Belardes's freaky blog tour.  Nick's book A PEOPLE'S HISTORY OF THE PECULIAR was published recently by Viva Editions. As a student of history, I found this book to be a splendid chronicle of engrossing, unconventional and riveting information. The foreword by bestselling author Caroline Leavitt emphasizes Nick's compelling gift and voice. His unique view of history is irresistible. The book is divided into eight chapters:

My preoccupation with history, especially strange history, began when I was six years old.  There were two main reasons.  First, I loved looking up at the night sky, and took the story of "the man in the moon" literally. When my parents woke me up to view the Apollo 11 Moon Landing on July 20, 1969, I believed that it all had been set up  for me personally to watch.  Second, I got my hands on a copy of the book RIPLEY'S 50TH ANNIVERSARY EDITION.  "Ripley" was Robert Ripley, a cartoonist and an entrepreneur whose "Ripley's Believe It Or Not" cartoon panels began to be syndicated by William Hearst in newspapers in 1925.  These cartoon panels consisted of everything unusual and strange.  Ripley traveled the world and took photographs of the extraordinary and the macabre, which he then turned into these panels. The panel which intrigued but repelled me the most was about grave robbers who procured corpses for medical doctors to dissect.
My first adult book, at age eight, was my grandfather's copy of the true crime classic In Cold Blood. Nobody wanted to hear about mass murder in Kansas in the schoolyard at St. Robert Bellarmine.  I couldn’t have cared less.  Once I knew that people wrote books about the macabre, I was hooked for life.
By 1990, I was a "book scout" in New York for a Hollywood producer, finding and assessing books to see if they could be adapted to the silver screen.   I had managed to find my way to the intersection where books meet film and television.  I had a great salary, and an expense account.  I went to free screenings and premieres of movies.  There was even some hobnobbing with celebrities.  Then something awful happened to me personally, and this affected my health.  I could no longer work, and I didn't much care what was happening in the world at large.  I was in a deep, dark place, and my cultural interests reflected this. I returned to my preoccupation with the all that was weird, strange and hard to explain.  My favorite television show was The X-Files.  (Granted, part of my passion for the show was the sight of David Duchovny in a Speedo.)  I went to see the film The Sixth Sense three times the week it opened in August 1999 (which, incidentally, coincided with the twenty-fifth anniversary of Nixon's resignation).  The film The Blair Witch was a revelation.  I was far too depressed to read much fiction, other than Stephen King and Dean Koontz.  But I could connect to nonfiction about true crime, disease and the paranormal.  I read books about ghosts, hauntings, psychic phenomena, UFO's, alien abductions, past lives, near-death experiences, Roswell, Area 51...and The Mothman.
The autumn of 2001 was devastating.  9/11.  My beloved Grandma died at the age of ninety-five.  Two of the vertebrae in my lower spine were ruptured due to the negligence of my personal trainer.  I decided I needed to go "home" to Ireland, to see my cousin Mary and her husband Declan.  Grandma had been born there, and I wanted to get away from New York and be where she had felt so connected.  I would be spending the long Thanksgiving weekend there, and I needed books for the long flight.

At the Barnes & Noble on West 66th Street and Broadway, I went upstairs to my favorite section:  paranormal nonfiction.  As I was holding a mass market paperback copy of Whitley Strieber's Confirmation:  the Hard Evidence of Aliens Among Us?, I noticed a well-dressed older man browsing nearby.  I became so caught up in reading the Strieber book that when he spoke to me, I startled.  He had a very kind face, and a great head of white hair.  He asked me if I had read Communion, Strieber's earlier work about alien encounters.  I told him I had, but that Christopher Walken's over-the-top performance had ruined the film adaptation.  We continued chatting about books on UFO's, and each shared a few personal details.  I told him about my past career working in book publishing, and then film and television.  He told me he was a writer.  For the first time in over ten weeks, I forgot about 9/11.  I relaxed, and enjoyed having a conversation with another New Yorker.  He told me that he also lived on the Upper West Side.  We must have spoken for twenty minutes. He gave me some good book recommendations.  Before he left, I said, "Oh, forgive my manners!  My name is Maura Lynch."  He responded, "It is great to make your acquaintance.  My name is John Keel."
Since John mentioned he was a writer, I went to the help desk to see if they had any titles by John Keel.  I was directed back to the section where I met John.  The name of his book was The Mothman Prophesies. And this all was very strange and very real indeed.
If you read the following sections of Nick's book, you can learn more about The Mothman:

Search For The Mothman (Featuring John Keel)
Posted by The Wiseacre at 8:00 AM