TV: True Detective - "Life's barely long enough to get good at one thing." 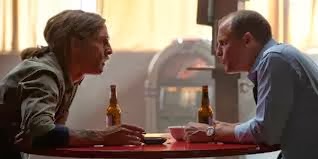 It's the day after the airing of the finale of True Detective, an 8-episode crime drama which had become the show which many hoped would define the zeitgeist of crime drama.  I see a lot of disappointed viewers and critics on the internet.

Creator and show runner Nic Pizzolatto gave Detective Rust Cohle  intense philosophical jeremiads to recite.  Pizzolatto stated in interviews that these are based on the philosophies of Arthur Schopenhauer and of Friedrich Nietzsche.  Still others believed that the "mythology" of the show was not sufficiently honored .  Pizzolatto stated that these supernatural horror elements, a.k.a. the mythology of  the Yellow King, were tributes to writers Robert W. Chambers, H.P. Lovecraft, and Thomas Ligotti.  The metaphysical conjecture written by critics was fun to read, but I didn't think it would lead to the discovery of the murderer.  That was window dressing.

I am thoroughly satisfied with True Detective because this group of people got real good at one thing: creating an exceptional crime story.  The southern Louisiana setting is unique and raw, yet also chimerical. The plot--two Louisiana State Police CID homicide detectives catch a ritualistic homicide in 1995 which leads them to pursue a serial murderer who is part of a larger, powerful cult of murder--is stupendous. Nic Pizzolatto's writing is superb. The mystery is strong, and the plot turns are adept and sometimes jaw-dropping. Cary Joji Fukunaga's direction of the series translated the fetid and the beautiful, and the repulsive and the heroic components of the script to the screen.  The six-minute long take at the end of Episode 4, "Who Goes There," made the audience feel as if they too were in the gun-fight. Each acting role, no matter how small, was cast and performed impeccably.

While both Matthew McConaughey as Rust Cohle and Woody Harrelson as Marty Hart are at the top of their game, neither portrays a particularly likeable character.  They are evenly matched in their self-destructive behavior. Much of the best dialogue consists of the harsh way they rip into one another. But you don't have to be likeable to be heroic.  Cohle and Hart are effective and masterful partners. While they may lash out at one another, they are a team who  risk it all in order to find out who the killer is.  The conflict isn't between Cohle and Hart, or between them and the Tuttles or even Errol Childress.  The conflict is between good and evil, between light and darkness, and between life and death.

"The world needs bad men.  We keep the other bad men from the door."

The Handsome Family - Far From Any Road