Personal Essay: Growing Up As A Catholic Feminist 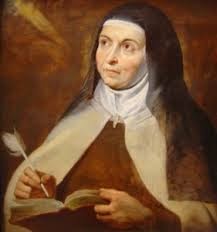 When I was thirteen-years-old in the spring of 1976, I faced a sacred rite of passage as a Roman Catholic girl.  I was about to make my Confirmation.  I spent the year prior studying and preparing to become an adult in my faith, and I took this very seriously.  Maybe even a little too seriously, since I was supposed to take this on faith.  I had anxiety about my Confirmation because I took exception to quite a few of The Church's practices and its theology. The priests kept telling me and my female peers that we could grow up and become a wife and mother or a nun.  The former meant Old School, Ephesians 5:22-24:

22 Wives, submit yourselves to your own husbands as you do to the Lord. 23 For the husband is the head of the wife as Christ is the head of the church, his body, of which he is the Savior. 24 Now as the church submits to Christ, so also wives should submit to their husbands in everything.

Submit!?  You have GOT to be joking! I was born just before the second-wave of feminism hit the United States.  My parents did their best to ensure that my innocence was intact, so I didn't actually know what sex was, let alone what women's reproductive rights were.  All I had been told by religious instructors about abortion was that it involved the murder of babies.  (It seemed to me if babies actually were being murdered then people outside the Catholic Church would be just as worked up as we were.)   I was a girl who had used her allowance to buy a subscription to Ms. Magazine in sixth grade.   My dreams involved attending and graduating from college, and embarking on a fabulous career.  I wasn't even interested in boys then, so marriage seemed like a trip to Mars.  It would be possible, but it would take a long time, and I hoped to be put into a state of suspended animation while I waited to find the right husband.

I didn't think becoming a nun would be a good fit for me either.  My mother had been thrown out of the Sisters of The Presentation in 1959 after being in the convent for one year because her asthma was so bad that they didn't think that she could truly have a life of service to the Lord.  I had a few distant cousins who were nuns, but they had vocations.  I wanted to have an occupation.  My plan was to become President of the United States.    So I was in a moral quandary.  How could I make my Confirmation if I didn't actually buy what The Church was selling?

I needed spiritual guidance.  My track record with the Catholic clergy was not that good initially.  While attending parochial school in Bayside Hills, Queens, our pastor, Monsignor McDonald, came into our second grade classroom.  He asked if anyone could say the Act of Contrition.  I raised my hand and waved it so hard I thought my arm would pop out of the socket.  Monsignor called on me.  I began:

"Oh my God, I am partially sorry for having offended Thee.  And I detest....
A voice boomed, "Sit DOWN, Maura Lynch!  That is incorrect!"  It was Monsignor McDonald.

The Act of Contrition begins, "Oh my God, I am heartily sorry for having offended Thee."

My parents laughed when I recounted my tale of woe that night at dinner.  They understood that their seven-year-old daughter had mistaken one ten-dollar adverb for another.  The humorless Monsignor McDonald instilled so much fear in me that I thought he would prevent me from making my First Communion.  By some miracle and the intercession of my guardian angel, he did not.

Then, when I was in third grade, I went through the Sacrament of Penance, or, as it is commonly known, Confession.  Kneeling in that dark, cold box behind the thick velvet curtain, I struggled to remember whether being angry with my sister for cutting my Barbie's hair off was a mortal or a venial sin.  All too soon Monsignor McDonald slid the screen open, and began.  I trembled throughout because I wasn't sure if I would be able to recite the Act of Contrition when he was done.  The Monsignor would "absolve" me of my sins.  While I believed that God would forgive me always, Monsignor McDonald's angry, white caterpillar eyebrows and furrowed brow told me he and God did not..

In the 1970's, the Church in the U.S. got very groovy.  I played guitar and sang at folk Mass.  We Catholics now had the Sacrament of Reconciliation.  I would go into a small, lighted room and sit in a chair directly across from Father Richard.  He would greet me, and then make the sign of the cross.  Then he invited me to have trust in God.  This shocked me because The Church was more about commands and demands than invitations. He would read a short Bible passage, and then I would confess my sins.  Then, Father Richard would counsel me.  He would guide me to make better decisions so that I could accept God's mercy.  After I said the Act of Contrition (which I finally memorized), Father Richard would place his hand over my head and say the words of absolution.  He concluded by saying, "Give thanks to the Lord for he is good."  Father Richard channeled God's love and forgiveness to me just as surely as Monsignor McDonald had funneled God's wrath.

So I went to Father Richard with my dilemma.  How was I going to take on the mantle of adulthood and make my Confirmation if I had so many problems with the roles which the Church assigned to women?  He was a young priest, but he was assured as well as assuring.  "We do not know what God has in store for us in this life.  We must put our faith in the constancy of His love for all of His children.  If you do not receive the sacrament of Confirmation, you will not receive the Holy Spirit.  You will not have the full store of God's wisdom and understanding available to you."

Now I know Father Richard wasn't playing me, but he certainly said the right words to the right young woman.  I didn't want to be cut off from any sort of wisdom and understanding.  After all, if I was going to be President of the United States, I needed total access to divine grace so that I could change the way the world treated women.  I made my Confirmation.