The Declaration of Independence, July 4, 1776: A Brief History 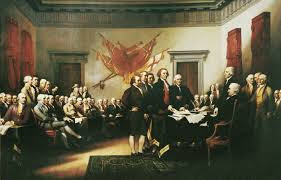 On July 4, 1776, two hundred thirty-seven years ago, delegates from the thirteen colonies met in Philadelphia at a convention called The Second Continental Congress.  The Revolutionary War with Britain had begun one year prior on April 19, 1775 when British troops and American colonial partisan militia ("Minutemen") engaged in battle in the Massachusetts towns of Lexington and Concord.  The thirteen colonies viewed themselves as independent states, no longer subjects of the British Empire, so the delegates came to draft a formal declaration of independence.   This decision was not made overnight, and there was strong dissension among the thirteen colonies.

Thomas Paine's pamphlet "Common Sense" had been circulating since January 1776, and gave rise to a great deal of public debate about "how declaring independence would affect the war effort" [Wikipedia].  Paine presented a reasonable argument that republicanism was a better form of governance than monarchism (which he deemed barbaric and absurd).  Yet, not all of the colonies were enthusiastic about making a formal declaration of independence.  Five middle colonies were very much in opposition of independence:  New York, New Jersey, Maryland, Pennsylvania and Delaware.  But then the proponents of independence won the Pennsylvania Assembly vote on the issue on May 1, 1776.   John Adams, attorney, delegate from Massachusetts, and very much an advocate for independence, wrote the preamble (the introduction to the document explaining its intent) on May 15, 1776.  For the next seven weeks, there was much political maneuvering.  Some delegates thought that it was too early to declare independence from Britain, hoping that securing aid from other foreign countries might prevent such a permanent separation.  Other delegates reasoned that procuring foreign aid for the war effort would be impossible unless a formal declaration of independence were made. While these political shifts, against and for independence played out, on June 11, 1776 the Congress appointed a committee of five delegates to draft the declaration of independence:  John Adams, Benjamin Franklin of Pennsylvania, Thomas Jefferson of Virginia, Robert R. Livingston of New York, and Roger Sherman of Connecticut.

Originally it was thought that John Adams would write the document, but he insisted that Thomas Jefferson be the author.  Adams definitely was consulted, and offered his opinion, on the wording over the seventeen days they had to complete the document.  The committee presented the document to the Congress on June 28, 1776.  For the next two days, Congress edited and altered the declaration. 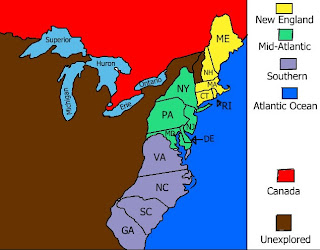 On July 2nd, New York still lacked authority on how to vote, and so abstained.  Two Pennsylvania delegates, giving the delegates for independence the majority, so Pennsylvania voted "Yay"  The Delaware tie was broken also by the arrival of a delegate who was for independence , and they voted "Yay."  South Carolina reversed its vote to "Yay" -- but only after the "anti-slavery" clause was removed.  The clause is as follows.  "He" refers to King George III of Britain.


He has waged cruel war against human nature itself, violating its most sacred rights of life & liberty in the persons of a distant people who never offended him, captivating & carrying them into slavery in another hemisphere, or to incur miserable death in their transportation thither. This piratical warfare, the opprobrium of infidel powers, is the warfare of the Christian king of Great Britain. determined to keep open a market where MEN should be bought & sold. he has prostituted his negative for suppressing every legislative attempt to prohibit or to restrain this execrable commerce; and that this assemblage of horrors might want no fact of distinguished die, he is now exciting those very people to rise in arms among us, and to purchase that liberty of which he has deprived them, by murdering the people for whom he also obtruded them:  thus paying off former crimes committed against the liberties of one people, with crimes which he urges them to commit against the lives of another.