Her Yellow Wallpaper, My Lavender Paint 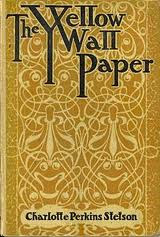 Today, July 3rd, marks the birthday of Charlotte Perkins Gilman (July 3, 1860 – August 17, 1935). Like many of us of a "certain age," I read her short story "The Yellow Wallpaper" as part of my own personal Women's Studies program in the early 1980's. At age eighteen I had watched my mother suffer a "nervous breakdown" after the death of her father. Mental illness was not a subject one discussed at home, not in my home. The power of denial is tremendous when a family member has a mental illness. You wouldn't want the neighbors to know what is going on behind the curtains. You wouldn't want them to hear the weeping from the upstairs bedroom window.

Miss Perkins Gilman wrote this story a few weeks before she turned thirty in 1890. It's six thousand words, and is written from the first person point-of-view of a woman (whose name might "Jane," though that is not conclusive) who is suffering from, as her physician husband John says, "a temporary nervous depression -- a slight hysterical tendency." The woman writes journal entries which she keeps from her husband because he, like her brother, another physician, does not believe she is sick. John has prescribed phosphates, tonics, air, exercise and absolutely no work for his wife. They are staying in a rented house for three months She spends most of her time in an upstairs bedroom which may once have been a nursery. John has placed bars on the windows. John also has put a gate at the top of the stairs. He has confined this woman because this is how husbands dealt with wives who were "not sick." As the story progresses, the woman descends into psychosis, bit by bit. While her real adversary is her husband, the woman focuses her rage on the yellow wallpaper. The denial about her illness instills life in the wallpaper. Is that a figure of a woman moving behind the wallpaper? The woman imagines that there is a terrible odor coming from the wallpaper, and has pyromaniac impulses. Finally, the woman tears strip after strip of the wallpaper off the wall. Ironically, if her husband John had only admitted that his wife was ill, she would not have descended into madness.

Miss Perkins Gilman definitely writing from what she knew. She married Charles Walter Stetson, an artist, in 1884, and, in 1885, she gave birth to her own only child, Katharine. Miss Perkins Gilman proceeded to have post-partum depression. She left her husband in 1888. She spent her life as a sociologist, as a writer, and, above all, as a feminist. Miss Perkins Gilman knew how damaging to women it was to lack freedom and liberty, to not have any real control over their lives.

I do not think she meant for her story to be purely symbolic, i.e. that a lack of autonomy could drive women mad. Men long have had the power to decide whether or not their wives are mentally ill, and to use that judgment to imprison their wives. I know that she suffered from severe depression, not because history tells us that she did. I know because I was misdiagnosed with a mental illness I did not have by a man, a psychiatrist. I know I have been battling depression for over twenty years. I know because there have been too many times when I have stared at the lavender paint on the walls of my bedroom and wondered how I came to be imprisoned in this room.  Thank goodness, I am well now, and, with my health, I am free to tell everyone just how sick I was.
Posted by The Wiseacre at 7:30 AM