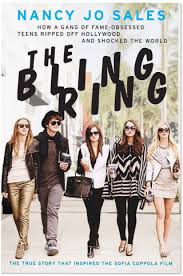 Nancy Jo Sales writes with stylish, crisp and keenly intelligent prose.  There’s a sassy turn of phrase here, a nod to Raymond Chandler there.  I particularly like Miss Sales’s L.A. cop connection “Vince.”  Smart investigator that he is, he knows why TBR did what they did.  They did it for the money!   She employs  history, economics, politics, sociology, and psychology while deftly moving the story along.   Her examination of what compelled and allowed these “girls and boys” to commit these crimes is provocative and profound.  This book would not have been half so pleasurable without Miss Sales’s dissection and analysis of how and why our 21st century society has become so obsessed with celebrity, wealth and fame.  THE BLING RING by Nancy Jo Sales is the thinking person’s summer read.
Posted by The Wiseacre at 6:44 PM