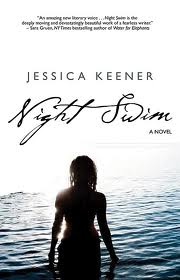 In 1978 I was a 15-year-old Irish-Catholic girl who was raised in an affluent Long Island suburb.  I was a good student; I played guitar and sang; I played the violin in a youth orchestra; and I was terrified what other people would think of me if they knew that my father drank.  Scarcely ever did I tell others about how my father’s alcoholism could launch our family into misery and chaos.  I was the eldest child, and I was “the good daughter.”  It is a terrible burden, and, unfortunately, my situation was and is more universal than specific.  In Night Swim Jessica Keener has brought the Kunitz family to life through the extraordinary first-person narrative of Sarah Kunitz.   In 1970 Sarah is a fifteen-year-old Jewish girl who is being raised in an affluent Boston suburb.  She is a good student; she plays the guitar and sings, but also studies piano in order to please her mother Irene, who was a classically trained violinist.  Sarah’s father Leonard is a volatile but weak man, a frustrated English professor who specializes in Shakespeare.  Irene suffers from terrible arthritis, and possesses an emotional fragility which makes her the kind of mother in her children’s lives who is as ephemeral as the smoke from her constant chain of cigarettes.  Irene, beautiful, blond, and exquisitely dressed, spends her days drinking scotch and taking pain killers.  She and Leonard go through the rituals of a happy family with dinner on the table promptly at 6 o’clock every evening.  Sarah, her older brother Peter, and her younger brothers Robert and Elliot try to get through the 20-minute-long meal without falling victim to Father’s wrath.  Peter and Robert are particular targets of Father’s verbal and physical abuse.  Sarah simply tries, as the only daughter, the best daughter, the most perfect girl, possible.  She longs for a deeper, more real connection with her delicate mother Irene.

When an accident occurs, Sophie begins to realize just how insubstantial the foundation of her family truly is.  She is out in a larger world now that she’s a freshman in high school.  While she studies and gets excellent grades, and has a strong, close friendship with another Jewish girl, Sophie, Sarah is fascinated by the Italian-American Margaret, who sits behind her in homeroom.  Margaret literally introduces Sarah to the darker side of life by bringing Sarah down to the restrooms in the basement hallways.  Sarah begins to copy some of Margaret’s behavior and “bad girl” image, but ever so furtively.

Real tragedy happens, and the Kunitz family is completely and utterly shattered.  Each child must find his or her own way without any parental guidance.  Sarah’s journey from the 15-year-old child to the 16-year-old woman is uniquely hers and unforgettable.  However, Sarah finds her own way to adulthood in quite an ordinary, relatable fashion.  Jessica Keener’s masterful, awe-inspiring prose is what makes Night Swim such an amazing and exceptional novel.

“I stood taller, turning my palm out, offering up my heart.  It was here, in this moment of singing, that I shed my shadows and ghosts…In bed that night, relief and exhilaration splashed against another layer that stayed ever the same inside.  Alone, the music that filled me, that had temporarily patched up the cracks and holes, drained away, like streams after a flash flood.  I was left with darkness again.”

I want to read this beautiful first novel again, and soon, in order to luxuriate in Keener’s writing.  However, I need time to allow the real pain and joy of adolescence, and of dysfunctional family, to settle.  Night Swim may break your heart.  Like Sarah, you’ll older and wiser.  And thanks to Keener’s talent, you’ll remember all the very private details of your own burgeoning youth.
Posted by The Wiseacre at 5:39 PM 3 comments: 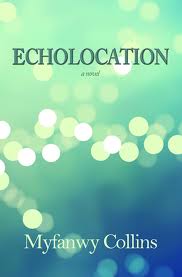 Truly great literary crime novels have the theme of family at their core.  Whether the family members are related by love and blood, or created by love and necessity, family is the most basic and base social unit we humans have.  Family, as we all know, can make people behave rashly or boldly or direct us to act in ways we never thought possible.  What we will do to preserve family, or sometimes destroy it, has mesmerized us since the beginning.  Myfanwy Collins’s ECHOLOCATION is a new classic literary crime thriller, beautifully written, seamlessly plotted, and heart-wrenching.

The novel is set in the north of New York State, in a small town in the Adirondack Mountains, 7 miles south of the Canadian border.  Cheri’s mother Renee (late 30’s) gave birth at age 16, then a few years later she took off with a man on a Harley-Davidson and fled to New Smyrna, Florida.  She left her daughter in the care of her much older half-sister Marie.  Aunt Marie also took in Geneva, a beautiful blond girl who had been neglected by her own mother Iris, when both girls were about 4-years-old.    Aunt Marie raised them as sisters, and taught them all the skills she herself had learned as a child during the Depression.  Marie runs a general store and gas station.  The girls are best friends, and spend a lot of time out in the woods and at a nearby quarry.  When Geneva and Cheri graduated from high school, Geneva, who had grown into an even more beautiful woman, accepted a marriage proposal from Clint, a good-looking ne’er-do-well.  Cheri couldn’t accept that Geneva had chosen Clint over what the two girls shared, and took off for the city.  She dresses very punk, has tattoos of shackles on her wrists, and her life revolves around drinking and promiscuity.

Four years later, Aunt Marie (late 70’s) is very ill, and Geneva (22) summons Cheri (22) home.  A few months later Cheri, who tends bar with her boyfriend Rick, a junkie with a criminal record, finds a reason to flee Florida.  It’s as though they are summoned by echolocation, a biological system of navigation used by bats (as well as some birds and a few other mammals) which involves hearing, not seeing.  These characters are listening with their hearts and with their own needs, but they all do come home.  But the family reunion, which occurs just before Christmas, is not a simple or joyous occasion.  People don’t change.  And sometimes they bring baggage both literal and metaphorical.  Sometimes they bring danger as an uninvited guest.

What ensues in ECHOLOCATION will take your breath away.  Collins has crafted a real page-turner.  I already have read it twice.  The first time I had to know what was happening and what would happen.  The second time I read it to become better acquainted with each of the characters, and to savor the singular setting, masterful plotting and exquisite prose.  Collins already has been compared to Daniel Woodrell, whose “country noir” novels set in the Ozarks, are superb.  However, I believe Collins clearly has earned her own rightful place in the pantheon, as the creator of “Adirondack Noir.” 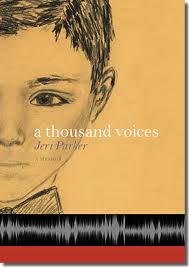